Four Tips For Your Next Motorcycle Ride 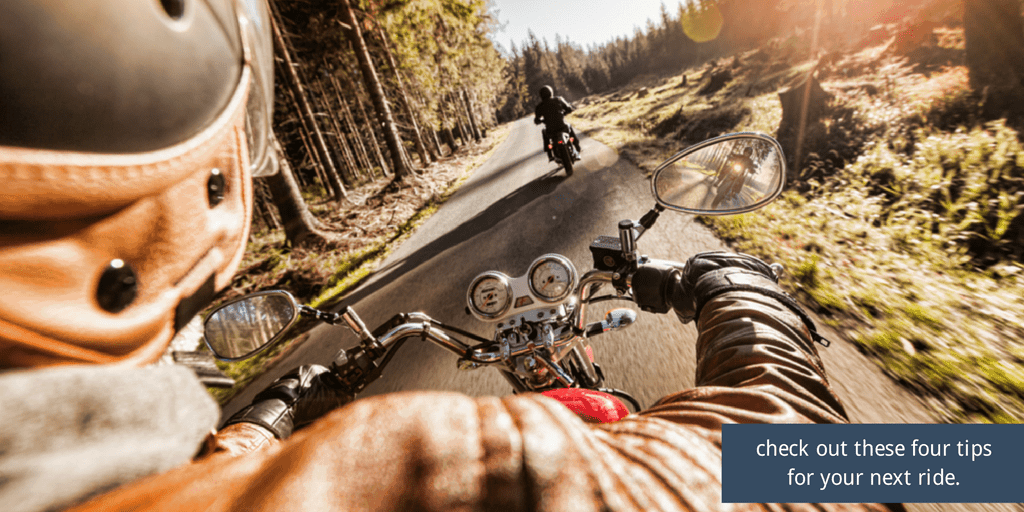 As a motorcyclist, sharing the road with other vehicles is a notoriously dangerous challenge. No matter how competent and intelligent you are as a rider, you face significant challenges on the road.  What are common motorcycle accidents, and how do you avoid them?

Car Turns Left in Front of You:

Also known as “judging the gap” this type of motorcycle accident in Aurora occurs when a vehicle attempting to turn left in an intersection either does not see you on your motorcycle, or misjudges your speed, and moves their vehicle into the intersection in front your path.

See it coming. As a motorcyclist, it is important to be hyper aware of conditions that lead to certain traffic situations. Are you the first vehicle in a gap of traffic? A vehicle might turn in front of you. Can you see a vehicle waiting to turn left? Be aware. Slow down, and cover your breaks. Once you have identified the threat, stay alert. Look at the vehicle’s wheels for signs of movement. Are there vehicles next to you preventing an evasive lane change? Be aware.

A Car Changes Lanes into your Path of Travel

You’re traveling straight on a multilane road, when another vehicle changes lanes into you, or directly in your path of travel.

Motorcycles fit nicely into blind spots. It can be very hard for vehicles to see a motorcycle that is around them. This is especially true if they are mentally preparing to only look for cars. The first step of avoidance is to be very aware of blind spots. Learn how to tell when you are in blind spots, and get out of them. Know when lane changes are common. Is one lane moving faster than another? Cars will often change lanes in those situations.

Rear-enders are common, and in a larger vehicle, they can be harmless. But on a motorcycle, getting hit from behind can be fatal.

It is difficult to completely avoid being hit from behind. It is hard to see cars coming. If you are nearing an intersection at a red-light don’t stop in the middle of the lane. Stop closer to the side of the lane. You can also utilize other vehicles as buffer zones for you and your bike. Is there a vehicle stopped at stop light with more cars coming from behind? Pull in front of it and you have your buffer.

A Vehicle Opens the Door

You are in traffic and see a clear lane in between the slow moving vehicles and the parked cars. You think you can just travel through, but then someone opens their door without looking.

Resist the temptation to travel between stopped or slow moving active traffic and parked cars. It is dangerous and not worth the risk.  If you do take the chance, break hard and fast. You might be able to minimize damage.

REMEMBER: If you are hurt, get medical treatment ASAP. Go to the Emergency Room either by ambulance or private vehicle. If you are able to remain at the scene, take pictures, call the police and give statements. After you have your evidence, you will still want to see medical attention.