Drunk driving is a serious act of recklessness that greatly increases the risk of catastrophic and fatal car accidents. Every year, thousands of people get injured and lose their lives in collisions involving alcohol. In the fight against drunk driving, awareness and education are crucial. Keeping up with the most recent Colorado drunk driving accident statistics gathered by our team of Aurora car accident lawyers can help you understand more about this prevalent problem.

What Is Drunk Driving?

Drunk driving refers to operating a motor vehicle with any degree of intoxication due to alcohol. Colorado’s drunk driving law defines the crime of driving under the influence (DUI) as driving with a blood or breath alcohol content (BAC) level of 0.08 percent or higher. Even if a driver has a BAC of less than 0.08, he or she can get arrested for driving under the influence if the officer suspects impairment. This is known as driving while ability impaired (DWAI). 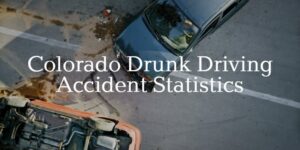 How Many DUI Arrests Are Made in Colorado Each Year?

Despite its obvious risks, many drivers make the reckless decision to drink and drive in Colorado. According to the most recent year data is available, the Colorado Division of Criminal Justice reported 26,255 DUI cases filed in criminal courts. The conviction rate for these charges was 88 percent. Over one-third of Colorado drivers convicted of DUIs were repeat offenders with at least one prior on their records.

The Dangers of Driving Under the Influence

Drunk driving does not only affect the intoxicated driver. This crime is an extreme risk to public safety, as it greatly increases the odds of a car accident. Drunk driving accidents are often severe to catastrophic in nature, as drunk drivers are more likely to engage in risky driving practices such as speeding, racing, red-light running, wrong-way driving and weaving through traffic. These dangerous acts make major car accidents more likely, including high-speed collisions, head-on collisions and T-bone accidents.

How Many Drunk Driving Accidents Take Place in Colorado Annually?

In 2019 (the most recent year crash data is available), there were 163 total alcohol-impaired driving fatalities reported in Colorado. Sixteen of these deaths were caused by impaired drivers under the age of 21. The majority of fatal accidents (78.2 percent) were caused by drivers with high BACs – over 0.15 percent. Most drivers with BACs over 0.15 percent were repeat DUI offenders (72.2 percent).

Crash data from the Colorado Department of Transportation in 2019 showed an upward trend in impaired driving involving multiple substances, such as marijuana and alcohol combined. This further increases the risk of a deadly car accident. The most common combination was alcohol, THC and other substances (40 percent), followed by alcohol and THC (32 percent).

Drunk driving is not only a problem in Colorado. Around the country, thousands of preventable drunk driving accidents occur annually. According to data from the National Highway Traffic Safety Administration, a total of 11,654 alcohol-impaired driving accident deaths were reported in the U.S. in 2020. This accounted for 30 percent of the total number of car accident fatalities. The number of deaths in alcohol-impaired accidents increased by 14.3 percent from 2019 to 2020.

Injured in a Denver Drunk Driving Accident? Get Help From Manning Law

Drunk driving accidents are always preventable. If you or a loved one has been injured in an accident involving a drunk driver, contact a car accident attorney in Denver at Manning Law for legal assistance. You may be eligible for financial compensation. Find out how our team of Aurora personal injury attorneys can help you with your accident claim. Contact us today to get started with a free consultation.