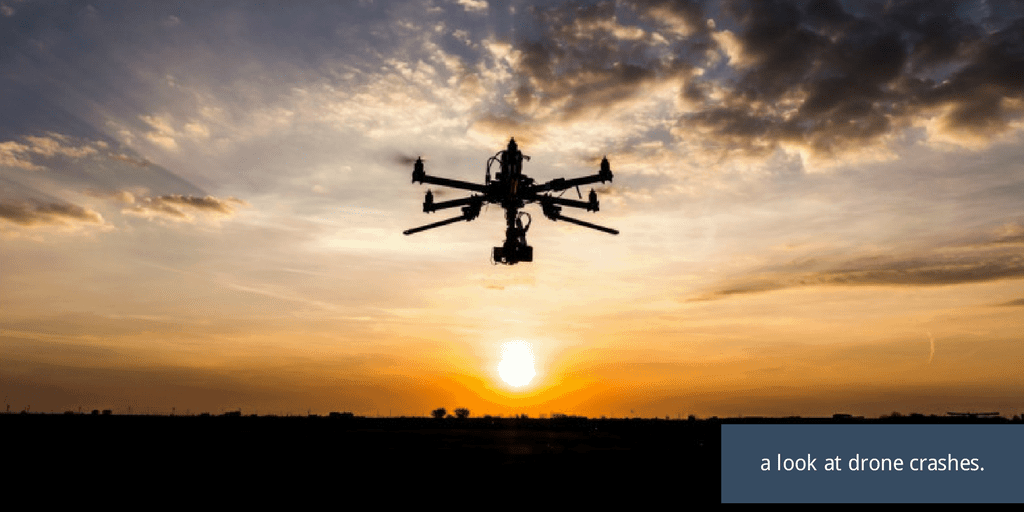 Were you recently gifted a drone? Did you stop to wonder what might happen if your new toy crashes into a car or building? We know we did. That’s why we wanted to spend a little time this week talking about drone injury liability. Before we take a look at this emerging field of law, we thought we’d share a few popular drone crash videos.

You may have seen this video before–and may even already know that it was faked using CGI. Even though this video isn’t real, the risk is. That’s why new regulations require drone operators to follow many of the same rules that apply to pilots. Restrictions on the height you can fly and the areas you can fly in were put in place in part to avoid accidents like this one.

While it may seem inconvenient, the truth is that our skies are full of airplanes. Operating your drone at a safe altitude can ensure that you can avoid causing potentially deadly accidents like the hypothetical in the video above.

Aerial photography is one of the coolest applications of drone technology. Unfortunately, as this drone crash video shows, it’s not without risks. The truth is, drones crash. Some simple common-sense precautions can help increase the likelihood that you avoid pummeling your subject.

Many drones have an automatic calibration feature. Before launching, the drone ‘levels’ itself. This helps to ensure an even flight. Making sure that you only launch your drone from a stable location, can help keep your device airborne.

These precautions aren’t a fool proof system, however. Gusts of wind can still throw a drone off balance. A dead battery can cause your drone to drop out of the sky. That’s why it’s so important to make sure that you know what risks are in the area you are flying over. Fly only in good weather, and over an area where you wouldn’t be concerned with your drone crashing.

One commenter on the drone crash video above pointed out that the blades of grass the propellor beat against during take off was a likely cause of the failure.

Airplane equipment has a reputation for being delicate. Drone equipment is no different in that regard. That’s why whether you’re flying a drone or driving a car, it is important to make sure your equipment is in good functioning order. There’s more at risk though than just breaking your new (and expensive) toy.

While early drone flights were considered ‘abnormally dangerous’ activities, US Courts have not yet classified drone operations under the same guidelines. If the courts determine that drone flights are ‘abnormally dangerous,’ owners and operators will likely be held liable for any damages caused by drone operation. While the courts work to sort out the specifics, it’s a good idea to operate with the utmost of care.